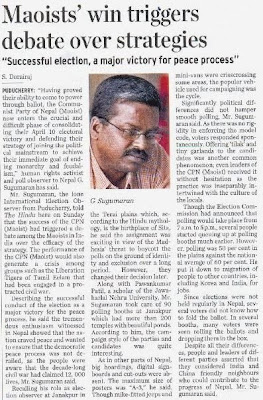 PUDUCHERRY: “Having proved their ability to come to power through ballot, the Communist Party of Nepal (Maoist) now enters the crucial and difficult phase of consolidating their April 10 electoral victory and defending their strategy of joining the political mainstream to achieve their immediate goal of ending monarchy and feudalism,” human rights activist and poll observer to Nepal G. Sugumaran has said.

Mr. Sugumaran, the lone International Election Observer from Puducherry, told The Hindu here on Sunday that the success of the CPN (Maoist) had triggered a debate among the Maoists in India over the efficacy of the strategy. The performance of the CPN (Maoist) would also generate a crisis among groups such as the Liberation Tigers of Tamil Eelam that had been engaged in a protracted civil war.

Describing the successful conduct of the election as a major victory for the peace process, he said the tremendous enthusiasm witnessed in Nepal showed that the nation craved peace and wanted to ensure that the democratic peace process was not derailed, as the people were aware that the decade-long civil war had claimed 12,000 lives, Mr. Sugumaran said.

Recalling his role as election observer at Janakpur in the Terai plains which, according to the Hindu mythology, is the birthplace of Sita, he said the assignment was exciting in view of the Madhesis’ threat to boycott the polls on the ground of identity and exclusion over a long period. However, they changed their decision later.

Along with Pawankumar Patil, a scholar of the Jawaharlal Nehru University, Mr. Sugumaran took care of 90 polling booths at Janakpur which had more than 200 temples with beautiful ponds. According to him, the campaign style of the parties and candidates was quite interesting.

As in other parts of Nepal, big hoardings, digital signboards and cut-outs were absent. The maximum size of posters was “A-3,” he said. Though mike-fitted jeeps and mini-vans were crisscrossing some areas, the popular vehicle used for campaigning was the cycle.

Significantly political differences did not hamper smooth polling, Mr. Sugumaran said. As there was no rigidity in enforcing the model code, voters responded spontaneously. Offering ‘tilak’ and tiny garlands to the candidates was another common phenomenon; even leaders of the CPN (Maoist) received it without hesitation as the practice was inseparably intertwined with the culture of the locals.

Though the Election Commission had announced that polling would take place from 7 a.m. to 5 p.m., several people started queuing up at polling booths much earlier. However, polling was 50 per cent in the plains against the national average of 60 per cent. He put it down to migration of people to other countries, includiong Korea and India, for jobs.

Since elections were not held regularly in Nepal, several voters did not kmow how to fold the ballot. In several booths, many voters were seen rolling the ballots and dropping them in the box.

Despite all their differences, people and leaders of different parties asserted that they considered India and China friendly neighbours who could contribute to the progress of Nepal, Mr. Sugumaran said. 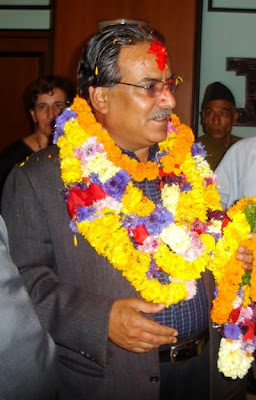 Email ThisBlogThis!Share to TwitterShare to FacebookShare to Pinterest
Labels: நேபாளம்